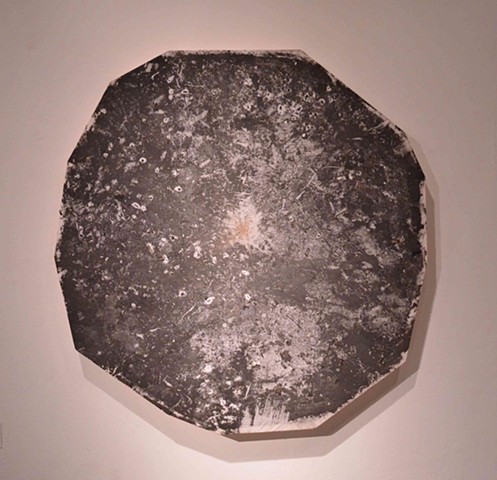 Under unfortunate circumstances, my studio mate left in 2011, leaving behind a vast amount of charcoal on the floor from an installation she was making. Wanting to use that space for storage, and yet feeling her absence, I swept the charcoal into a large shape and let it stay that way for some time.

As I was taking photographs of him leaving footprints in the dust, he began convulsing uncontrollably, and flopping around. It was clear that this would be the first time I would witness something die, and there was nothing I could do. I brought water, just in case, but otherwise could only try to console the bird. He let me stroke his feathers, though it was clearly painful. He seized and stopped, and seized, and then finally stopped altogether.

A canvas was prepared in the shape that I had swept, a small sand stone was thrown into the center, I shaved my head, and embalmed the starling. In the print, there are clear marking of feet and at least one clear impression of a splayed wing.